Skip to content
Home » Telling the Truth about the Past » In K-12 Schools » Resources for Teaching with Lies My Teacher Told Me » Essay 2: How to Teach Slavery

Essay 2: How to Teach Slavery

To understand our country, Americans have to understand the role slavery has played. Understandably, the topic can make teachers nervous. But teachers who leave it out, cover it hastily, or soften its harshness inadvertently minimize its importance. This makes history white, not right.

Most textbooks now show the horror of slavery and its impact on black America. However, they remain largely silent about its impact on white America, North or South.

Slavery’s twin legacies to the present are the social and economic inferiority it conferred upon blacks and the cultural racism it impregnated within white minds and inside our culture. Both still haunt our society. Unlike slavery, racism is not over yet. Textbooks have trouble treating honestly any problem that has not already been solved.

The key insight students need is: racism arose in part as the rationale for slavery. (It also rationalized the taking of the land from indigenous peoples.) Montesquieu, the French social philosopher who had a deep influence on American democracy, summed up the role of racism ironically: “It is impossible for us to suppose these creatures [slaves] to be men, because, allowing them to be men, a suspicion would follow that we ourselves are not Christian.” Here Montesquieu is presaging Leon Festinger’s idea of cognitive dissonance — that people mold their ideas to rationalize their actions.

People are not born racist. Little babies have no idea that people come divided into different races. Indeed, biologically, there is only one race – the human race. History divided us up into races.

Slavery had existed long before racism, of course. Europeans enslaved each other, Africans each other, Native Americans each other. Previous slaveries hardly treated enslaved persons justly, but slaves sometimes did get traded back to their home people. Or they might eventually marry someone from the host society, thus escaping bondage. Around 1450, however, Europeans put together cannons, ships that could sail against the wind, and other social and physical inventions and proceeded down the coast of Africa with a newfound military superiority. The racial slavery that resulted offered almost no way out. Moreover, one’s children and their children were also enslaved forever. Such blatant injustice required stronger justification — hence racism. By the 1850s, most whites considered blacks so inferior that slavery was appropriate for them.

This view of African Americans was not just Southern and did not just go away in 1865, when slavery was outlawed. The very essence of what we have inherited from slavery is the idea that it is appropriate, even “natural,” for whites to be on top, blacks on the bottom.

The struggle over slavery and white supremacy is the dominant single theme in American history. Most antebellum mansions, North and South, were built by slaves or from profits derived from the slave and cotton trades. Black-white relations became the central issue in the Civil War, which killed as many Americans as all our other wars combined. The political and social contest between blacks and white supremacists was the main issue of Reconstruction. The Nadir of race relations (1890-1940) then led to the ongoing struggle for civil rights. 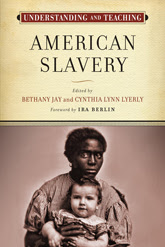