Problems with the History of Slavery, Secession, the Confederacy, Civil War, and Reconstruction

Since the formation of the U.S., surely the most important thing to happen to it was our Civil War. However, until at least 2010, most Americans did not grasp the essence of slavery, nor its importance in our past. Loewen conducted referendums that showed Americans didn’t know why the Confederacy seceded. Central truths about the Civil War went untaught, and most people thought Reconstruction was ended because it was failing; actually it ended because it was succeeding.

As of 2011, the sesquicentennial of the Confederate States of America, no compilation of documents about secession, its formation, its conduct of the war, and then its “life” thereafter in our culture existed. Most relevant documents and speeches could be found on the web, but only if one knew where to look. Rather than quote from the “why” statements – such as South Carolina’s “Declaration of the Immediate Causes Which Induce and Justify the Secession of South Carolina from the Federal Union,” textbooks and collections reproduced the Ordinances of Secession, bare-boned documents that merely said the union “is dissolved.” (Here is an on-line textbook that follows this tradition of devoting space to this dull document.)

As a result of this near suppression of the facts, most Americans hold basic misconceptions about the Confederacy, the Civil War, and the acts of neo-Confederates afterward. For example, many Americans – including many K-12 history teachers – think the Confederate States seceded for “states’ rights.”

This error persists because most have never read the key documents about the Confederacy. The Confederate and Neo-Confederate Reader supplies the “why” statements and also provides a selection of articles and speeches leading up to secession. It shows the differences between the C.S.A. and U.S.A. constitutions and includes explanations of the various flags of the Confederacy. It then provides original sources showing how neo-Confederates distorted the cause and conduct of the South in the fourteen decades that followed.

The most recent document — Georgia Gov. Sonny Perdue’s 2008 “Confederate History Month Proclamation,” shows a new twist. Now Neo-Confederates claimed that “thousands” of African Americans “saw action in the Confederate armed forces in many combat roles.” The book shows what’s wrong with this claim and also explains why it is crucial to get this history right in the 21st century.

The Table of Contents is available here. The Confederate and Neo-Confederate Reader is now also available as an audio book.

Interviewed in Mississippi, Loewen explains why he wrote (and co-edited) The Confederate and Neo-Confederate Reader.

Loewen spoke to teachers at the National Council for the Social Studies upon the launch of The Confederate and Neo-Confederate Reader.

The OAH (Organization of American Historians) and their Magazine of History tell how to teach with The Confederate and Neo-Confederate Reader.

Here are flashcards about secession that get it right.

Articles by Loewen about Slavery and the Civil War

This libretto is available without charge for any person, composer, institution, opera program, etc. that wants to make use of it. It is also available, probably without charge, to any group that wishes to modify it into a play. Contact the webmaster for written approval. There may even be some financial support for it as an opera production.

“Notes on the History, Music, and Structure”

The entire libretto, “The Liberation of Richmond” 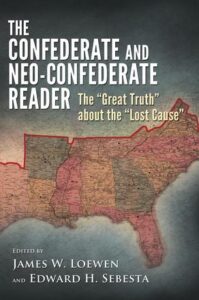 The Confederate and Neo-Confederate Reader provides a collection of secession statements and other crucial primary sources about the Confederacy with commentary by Loewen and co-editor Ed Sebesta. Released in 2010, just in time for the sesquicentennial of the Civil War, Loewen felt it was necessary as a way to correct the myths about secession that developed in the public conscience in the years following the war.