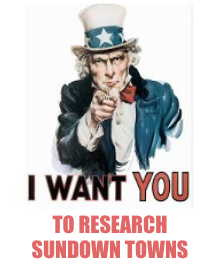 Dozens of students, from middle-schoolers in Ohio doing a project for National History Day to grad students finishing dissertations in Arkansas and the suburbs of Los Angeles, have worked on confirming sundown towns. Loewen supervised a series of undergraduates at the University of Illinois, usually working in pairs. Other professors led entire seminars on sundown towns or included research projects on the topic as part of larger courses. Citizens, from residents of sundown towns trying to spark change to African Americans appalled at treatment they had experienced, have emailed this site over the years, supplying detailed stories with approximate dates. This page supplies what you need to continue their work. Doing so is important, because even after they admit Black families, towns often suffer from second-generation SDT issues, such as BLM policing, racist rhetoric, and White school curricula. Also, simply “outing” a SDT often helps it change, because they are hard to defend. Few are willing to say, “Black people are so inferior that Whites are justified in flatly keeping them out of entire communities.” So research can lead to progress.

How to Research Sundown Towns

Because there were thousands of sundown towns and suburbs in the United States, we have not been able to confirm them all. The sheer extent of the problem needs study. The first urgent need is for researchers to confirm (or disconfirm) probable sundown towns. These are communities that were overwhelmingly white for decades, but they cannot be considered sundown towns, absent evidence that they kept out Black (or other) groups.

Here are Excel files of town populations by race for selected states. Some are much more complete than others. If you develop such a file for a state not included here, or a more comprehensive file for a state that is included here, kindly email it and we’ll post it below for other researchers to use. Thank you. Email publichistorysites@gmail.com.

Pink (or orange) towns on these maps probably were sundown towns, but most have not yet been confirmed. Done by hand, from 1999 to the present, these maps have largely been superseded by this map, generated by computer from the ever-growing sundown town database.

At their peak in 1970, perhaps 10,000 communities across the United States kept out African Americans, and many sundown suburbs also excluded Jews, Chinese Americans, or other groups. The existence of sundown towns over many decades provides important research possibilities for high school and middle school students, college students, and graduate students. “Ongoing and Future Research Areas” on this page suggests specific topics for research.

Confirming sundown towns provides a powerful first step toward helping them change. Middle-school students in Ohio did award-winning local research on sundown towns for National History Day. Professors in courses ranging from “Race and Space” (Landscape Architecture) to “Twentieth Century” (History) have assigned students to read and think about Sundown Towns. Beyond merely reading the book, undergraduates have done research projects studying a nearby sundown town or each choosing a different town to confirm. Graduate students are doing or have finished dissertations on sundown towns in Arkansas, California, Indiana, Michigan, and perhaps other states.

Stephen Berrey moderates a discussion, “Teaching with Sundown Towns,” for teachers on all levels who have used the book and this website to get students to do research confirming communities as sundown towns. We invite them — students too, and “mere” citizens as well — to send him reports of this work. Eventually we shall post your findings into the database that underlies the maps and categorical interface on sundown towns. We shall also post good teaching ideas into the “Teachers Corner on Sundown Towns.”

Confirming sundown towns is a first step toward changing them. Even towns that no longer exclude need to acknowledge their sundown past, partly to avoid second-generation sundown town problems. Students, citizens, and teachers can use the information they have gathered to help.

In addition, Prof. Jean Moule, Oregon State U., has had several classes do research on sundown towns in OR. Here are some findings.

Teaching for Change has a page with various ideas for how K-12 students have learned about sundown towns.

Professors in courses ranging from “Race and Space” (Landscape Architecture) to “Twentieth Century” (History) have assigned students to read and think about Sundown Towns. Beyond merely reading the book, undergraduates have done research projects studying a nearby sundown town; graduate students are working on dissertations on sundown towns in California, Arkansas, and perhaps Michigan.

Tell us what use you’ve made of Sundown Towns and we’ll post your idea(s) here.