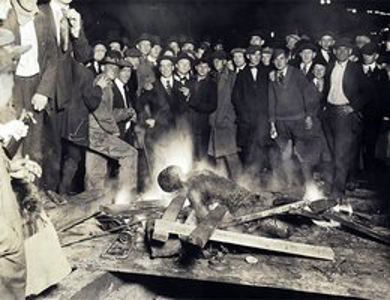 For years, Loewen gave a talk, “The Most Important Era You Never Heard Of And Why It’s Especially Important Today.” That era is, of course, the Nadir of race relations. In those years lynchings went to their all-time high, and as this photo shows, from Omaha in 1919, not all lynchings took place in the South.

During the Nadir, race relations grew worse and worse. First baseball, then horse racing, then the NFL threw out black competitors. So did occupations; African Americans could no longer be mail carriers, carpenters, or sailors. Harvard now kept black students from living in dorms. So did the University of Minnesota. Blacks had to plan vacations carefully, lest they find themselves trying to buy gas in a sundown town when dusk approached.

Resources on the Nadir of Race Relations