Skip to content
Home » Telling the Truth about the Past » In K-12 Schools » Resources for Teaching with Lies My Teacher Told Me » Essay 13: American Indians as Mascots

Across the country, schools used to give their athletic teams tribal names or generic American Indian terms. Whites in Native garb and covered with Native symbols like eagle feathers served as mascots.

In the last twenty years, Native Americans and non-Native allies have challenged these traditions. From now on, such mascots, symbols, and names will be controversial. Never again can they unify students and communities as they did.

In the last twenty years, Native Americans and non-Native allies have challenged these traditions. From now on, such mascots, symbols, and names will be controversial. Never again can they unify students and communities as they did.

Teachers can help students become more knowledgeable about this issue and more sympathetic to those challenging the practice. Students at schools not burdened by these symbols may need this sensitivity to avoid ridiculing real Natives when such students play teams still beset by these mascots. Students will also want to understand the recurring disputes about such nationally-known teams as the Cleveland Indians, Washington Redskins, and Florida State Seminoles.

Historically, most teams that use Native mascots chose to do so during the Nadir of race relations. (Earlier essays have mentioned the Nadir; the next one treats it directly.) During this era (1890-1940), Native Americans sank to their lowest numbers; their cultures, languages, and land bases were also endangered. Meanwhile, eugenics, a “science” that “explained” Native defeat as genetically ordained, rose to its zenith. Ironically, so did the “Improved Order of Red Men,” a fraternal organization that did not let American Indians join. White appropriation of Native symbols reflects the intense racism of that era.

Like the “Improved Order of Red Men,” using 19th-century American Indian images as mascots implies that Natives are a thing of the past. Some fans claim that they use terms like “Redskins” or “Braves” as signs of their deep respect for Native peoples and traditions. Students can examine readers’ comments posted at news sites below articles challenging these names. Often the staunchest fans stoop to say the harshest things about Native objections.

Surely the worst term is “Redskins.” Anyone who can read a dictionary knows it is a racial slur. No one would say it in everyday conversation. Among the members of a recent House of Representatives, for example, were two Native Americans, or perhaps “American Indians,” but certainly not two “redskins.” Yet the NFL team in our nation’s capital is still the “Redskins.” Admittedly, a poll shows that most Native Americans aren’t offended by “Redskins.” The problem is that terms like “Redskins” and “Savages” do not offend more non-Natives. Instead, many non-Natives infer that they can do as they please, since Natives are such a small minority anyway. In the process, they claim the right to use Native imagery as they wish, even though they are not Native.

That last point undermines another defense: that Native Americans aren’t the only people used as mascots. Often Notre Dame is invoked. Students can research who controls that university. They will realize that if Irish Catholic Americans thought for a moment that “Fighting Irish” demeaned them, they’d change it. Native Americans are only 1% of the population, so they cannot control the use of Native images by white institutions.

Mascots treat American Indians as unchanging has-beens who inhabited the past but don’t count nowadays. We need to communicate just the opposite, that we value them today. Plains Indian culture was itself an example of rapid change, triggered by syncretism — pulling ideas together from two cultures to form something new. That’s how cultures usually change.

All Native children need to understand the concept of “syncretism.” They do not have to face a stark choice between “becoming White” and “staying Indian.” Non-Natives need to learn the term too, partly so we can encourage Natives to stay true to themselves while contributing to our syncretic American culture. 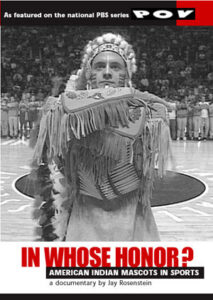