Skip to content
Home » Telling the Truth about the Past » In K-12 Schools » Resources for Teaching with Lies My Teacher Told Me » Essay 10: The Pantheon of Explorers

Essay 10: The Pantheon of Explorers

As soon they “finish” with Native Americans, textbooks launch into the canon of great explorers. After a nod to the Norse, the list begins with Henry the Navigator, who “trained the [crews], improved the design of ships, and gathered maps,” to quote one textbook. Sending them down the west coast of Africa, he started the racially-based slave trade. Next came Bartholomeu Dias, who rounded the Cape of Good Hope in 1488; Columbus; John Cabot, who sailed along Newfoundland in 1497; Vasco Da Gama, who reached India in 1498; Ponce de Leon, who wandered around Florida; Cortés, who took Mexico; Magellan, whose men circumnavigated the globe; Pizarro; and finally De Soto, who “discovered” the Mississippi River in 1541.

Problems start with Prince Henry. He didn’t innovate all by himself. He practiced syncretism — combining ideas from other cultures to form something new. He took cannons and gunpowder from China, “Arabic” numerals and the decimal system from India, bureaucracy and drill from Europe, and caravels from Egypt to form a new force — a fleet that could sail against the wind and then deliver overwhelming force against a land target. Crediting other cultures is important, because in 1450 Europe begins to dominate the world, a process that still affects us. Teachers must not let textbooks convey that Europeans did it all themselves, because they didn’t, and because doing so can imply white superiority.

It’s not clear why U.S. histories include people like Dias or Da Gama, who never got here, but clearly we are supposed to revere them. Instead, teachers need to get students to ask a crucial question: what did these men do after they arrived? Often this means looking at their second voyages.

On Da Gama’s second trip, he anchored off Calicut (Kozhikode), a city in southwestern India. He determined to stop the Muslim dominance of Europe’s trade with India. He demanded that the leaders of Calicut cut off their Arab trading partners, who practiced the “wrong” religion, and henceforth trade only with the Portuguese. Having had centuries of good relations with the Arabs, Calicut refused. So Da Gama shelled them broadside. They were defenseless to reply. Then he withdrew to let them think it over.

Into this situation, unknowingly, sailed a flotilla of eighteen Arab trading ships. A Portuguese historian tells what happened next:

[Da Gama] ordered the boats to go and plunder the small vessels, which were sixteen, and the two ships, in which they found rice and many jars of butter, and many bales of stuffs…. Then [he] commanded them to cut off the hands and ears and noses of all the crews, and put all that onto one of the small vessels…. He ordered their feet to be tied together, as they had no hands with which to untie them; and in order that they should not untie them with their teeth, he ordered them to strike upon their teeth with staves, and they knocked them down their throats; and they were thus put on board, heaped up upon the top of each other, mixed up with the blood which streamed from them; and he ordered mats and dry leaves to be spread over them, and the sails to be set for shore, and the vessel set on fire; and there were more than 800 Moors; and the small vessel … with all the hands and ears, was also sent on shore under sail, without being fired. These vessels went at once on shore, where many people flocked together to put out the fire and draw out those whom they found alive, upon which they made great lamentations.

“Shock and awe” indeed! Reading this passage helped me realize that simply to place Da Gama onto the revered list of great explorers distorts history. Surely students should read it too. Most of the others on the list were similarly brutal. Honoring them seems inappropriate. Historical figures do not belong in a pantheon. They deserve examination, not adulation. 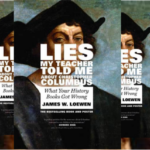